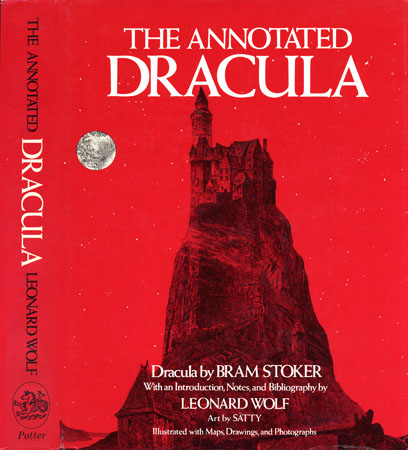 
Bram Stoker (Author) - Leonard Wolf (Editor)
Publisher: Crown (1975)
Leonard Wolf has been described as the world's most revered Dracula scholar. A native of Transylvania who left "the land beyond the forest" as a child, Wolf has taught and written about Bram Stoker's gothic masterpiece for decades. In 1975, he published The Annotated Dracula, which remains to this day the most elaborately annotated edition of the novel and has been the version found in  Bishop Seán Manchester's extensive private library since its publication.

The Annotated Dracula is a large book whose many illustrations and interesting notes are a pleasure to peruse. The text of Bram Stoker's Dracula is taken from the second printing of the first edition, with typos in tact. The annotations include over one hundred illustrations, drawings and monochrome photographs. Fifteen full-page drawings by the artist Sätty (Wilfried Podreich) are also featured. These are captivating expressionist interpretations of scenes from Dracula. All the illustrations are black and white.

Leonard Wolf was born in Vulcan, Transylvania. There are two villages named "Vulcan" in Transylvania. They are known in German as Wolkendorf bei Kronstadt (Vulcan near Braşov) and Wolkendorf bei Schäßburg (Vulcan near Sighişoara). Which, we must ponder, does Wolf hail from? Wolf is best known for his authoritative works on horror genre literature and film. He was the editor of The Essential Frankenstein and The Essential Dracula and technical advisor on the early 1990s films Bram Stoker's Dracula and Mary Shelley's Frankenstein. Wolf is also a much-published writer of poetry, fiction, social history, and biography, and a leading translator of literature. His writing in the horror genre has twice been honoured with the Anne Radcliffe Award for Literature. His most recent book as an editor is The World According to Itzik: Selected Prose and Poetry, a compilation of the works of folk writer Itzik Manger. Leonard Wolf lives in New York City.
A native of Transylvania who left "the land beyond the forest" as a child, Wolf has taught and written about Bram Stoker's immortal novel for decades.

The Annotated Dracula is a large book whose many illustrations and fascinating notes are a sheer pleasure to peruse. In his introduction, the author takes the reader on a tour of the traditions and circumstances from which Dracula eventually emerged at the hand of Bram Stoker. He discusses Gothic Romance literature, the vampire literature that preceded Dracula, Eastern European vampire folklore, Vlad Tepes (the 15th century Wallachian Prince from whom Count Dracula takes his name), and, finally, the life of the novel's enigmatic author, Bram Stoker. Annotations in the form of margin notes are found on most pages of the novel. Wolf has included explanations for every imaginable allusion in the text, as well as interesting personal comments. The reader receives quite a history lesson just reading the notes. Some of the most intriguing notes include: recipes for the Romanian dishes on which Jonathan Harker dines, population demographics for Transylvania in the late 19th century, translations of old Mr Swales' dialect, explanations of Victorian figures of speech, and the particulars of Victorian typewriters that Mina employs so frequently. Reading straight through the abundant notes might prove a too much for the average reader because reading them while following the novel can prove distracting. They are nevertheless ideal for afcionados, enthusiasts and students concentrating on one chapter or passage at a time and ceratinly add to the enjoyment of the novel when absorbed in moderate doses.

The Appendixes contain maps of Transylvania, Europe, England and Wales, Whitby, London, and the Zoological Gardens in London, with places from the novel marked. A calendar of incidents charts the events of the novel from May to November 1887 (the year Dracula takes place) in coherent form. Students and aficionados may appreciate "Dracula Onstage," a chart of Count Dracula's appearances in the novel, with page numbers. There is a Selected Filmography that includes notable Dracula films, 1922-1974, including films featuring the Count Dracula character, not necessarily based on Stoker's novel. British, American, and foreign-language editions of Dracula from 1897 to 1973 are also listed. There is an Index for the novel that is helpful but not comprehensive. The marvelously sinister etchings by Satty (of Ramparts and the Berkeley Barb), this reprints Brain Stoker's deathless (undead?) story with copious annotations and informative illustrations make this an absolutely essential collector's item. Trivia such as what a yew branch looks like, or a trephining apparatus, or to know the Orient Express connections to Bulgaria before 1894, along with all the rest of the weird and wonderful additions, serve to make Leonard Wolf's The Annotated Dracula the best edition in existence.
Posted by FoBSM at 01:00