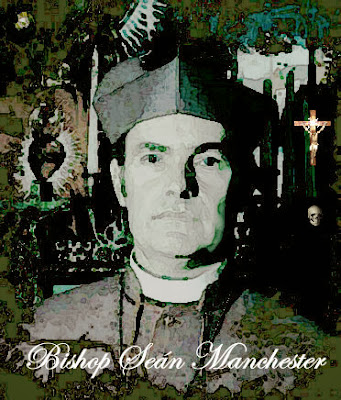 Statement issued on 13 December 2013 by Bishop Seán Manchester regarding his status altering from public figure to private person:.

“I find today's world, particularly the cyber-world, all too frenetic and reactive. This jars with my own desire for creative contemplation instead of the tumult I see around me which being a public figure only serves to exacerbate. This reflective approach to everyday existence is at odds with being under public scrutiny, somewhere I have found myself for the past forty-four years. What most brought me to public attention were the television and radio programmes I regularly appeared on and also the books and documentary films associated with topics which hold the public imagination in thrall. It is for that reason I have not submitted a book for publication since the beginning of the 21st century. Likewise, I scaled back my broadcasts in the media to a point where I no longer make them. I ceased giving interviews to the print media decades ago and only then in quality magazines. Moreover, it will soon be three years since I declared I am no longer prepared to provide interviews on matters relating to Highgate. What there was to say has been said many times over. I found myself answering the same questions over and over again; questions which invariably are already answered in my published accounts. One of the problems, I quickly came to realise many years ago, is that interviewers, regardless of the subject, simply do not know the right questions and the questions are every bit as important as the answers. Another problem in the new century has been one of trust. Seldom have I encountered an interviewer in recent years who keeps his or her word. Consequently, any condition I might have set for providing a contribution was frequently and almost immediately compromised. Without trust and a sense of honour there is nothing. I cannot interact in that way and would rather stay silent than witness yet another agreement broken. I am still having to regularly turn down television and radio interview requests, along with a plethora of other invitations to partake in projects that would maintain a perception of me remaining a public figure, which, I accept, is exactly what I have been for most of my life. What made me so, however, is very much in the past. The memoir I began to write a decade ago will probably never see the light of day. This is for the best if I wish my privacy to be respected. The concomitants of being a public figure have slowly eroded over the last thirteen years to a point where I stand at the threshhold of finally achieving meaningful privacy. Hence, I have now stepped over that threshhold and become a private individual. This will not affect my episcopal duties, sacerdotal ministry, art and music etc, but involvement in secular preoccupations and the expression of views on same in the public hemisphere is now at an end.”   † Seán Manchester
Posted by FoBSM at 04:00